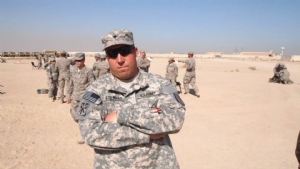 Hello my name is Jerry Stewart, I served in the Army for 13 years, and the Tennessee National Guard for 5 years.  I am married with three kids, the oldest is in her second year at Austin Peay State University, my son is in 10th grade at Seigel High School, and the youngest is in 8th grade at Seigel Middle School.
While active duty I was stationed at Fort Bliss, and Fort Hood, I was also at Osan Air Base and Kusan Air Base in South Korea.
I deployed to Qatar for 15 months and Kuwait for a year.  I was a Patriot Missile Launcher Operator and Maintainer.
While with the Tennessee National Guard I was assigned to the 269th Military Police Company here in Murfreesboro, TN. While with the 269th MP Company I was part of the clean up after the March 2020 tornado in Mt. Juliet, TN.
I enjoy my work I am doing here at Post 4575 as the Adjutant, and updating the post social media and web site.
If there is anything you would like to see on the web site let me know.